Uncover just a few of the gems to be found in the Flanders region of Belgium which is famous for chocolate, beer and lace. 2018 is the 100th anniversary of the end of WW1 so this holiday also incorporates some poignant sites.

Uncover just a few of the gems to be found in the Flanders region of Belgium which is famous for chocolate, beer and lace. 2018 is the 100th anniversary of the end of WW1 so this holiday also incorporates some poignant sites.

YPRES is ‘a charming city to experience, discover and enjoy’. The city has a rich and varied past that began in the middle ages as a thriving trade centre producing fine quality cloth. During WW1 it was reduced to a heap of rubble but in the following decades, was carefully restored to its former glory. Today attractions include; the magnificent Cloth Hall, St Martin’s Cathedral, the emotive ‘In Flanders Field Museum’ and of course the Menin Gate Memorial where the poignant ‘Last Post’ ceremony takes place every evening at 8.00pm.

BRUGES a fairy-tale like city that will capture your heart! Its packed with picturesque cobbled lanes and dreamy canals that link charming market squares lined with ancient towers, historic churches and old whitewashed almshouses. The city has gone by many names: City of Romance; Venice of the North and Cultural Capital of Europe but none of these capture the stunning beauty of this unforgettable city.

POPERINGE is an attractive, welcoming little town which, during WW1, was well known as ‘Pop’ to the many Allied soldiers who fought in the Ypres region. The town’s history dates back to medieval times, at its centre you’ll find the tranquil Grote Markt with imposing Town Hall that has some sombre secrets to reveal. TALBOT HOUSE is a vibrant and impressive museum but during WW1 it was a ‘club’ opened by two army chaplains, where soldiers could rest and relax whilst away from the front line. In addition to the house itself you can also visit the ‘Concert Hall’, ‘Tubby’s’ room and the pretty gardens.

LIJSSENTHOEK MILITARY CEMETERY is the second largest Commonwealth cemetery in Belgium. The village was the site of the largest evacuation hospital in the Ypres region and at the Visitor Centre you can learn about the cemetery, hospital and the graves of over 10,000 casualties from 30 different nations. 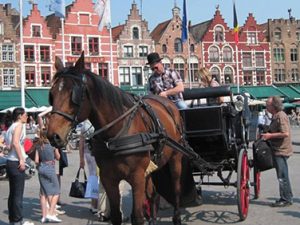