Glorious Cornwall renowned for its countryside and striking coastline!

The 2 star Priory Lodge Hotel, Newquay is a friendly, family run hotel, converted from an old vicarage, it stands in its own grounds overlooking the beach. It is ideally situated only a 2 minute walk from the town centre and a 5 minute walk from the town’s sandy beaches. All rooms are en suite, spacious with television, tea/coffee facilities, telephone and hairdryer. Wi-Fi is available in public areas. Please note the hotel does not have a lift and a few rooms are located adjacent to the main building.

Located on Cornwall’s north coast is the seaside town of NEWQUAY. It was originally a fishing port before the ‘new quay’ was built in the 15th century from then it was used to export tin and copper during the mining hey-day. Today it’s one of the nation’s favourite seaside resorts, famed for its laid-back charm, beautiful beaches and strong surf making it a surfer’s paradise! Attractions here include the Blue Reef Aquarium, Newquay Zoo and sub-tropical gardens. 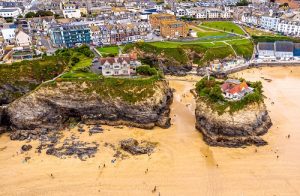 Nestling in a crater the size of 30 football pitches is the EDEN PROJECT a dramatic global garden housed in several biomes. Its said to be the largest greenhouse in the world and has been dubbed the ‘Eighth Wonder of the World and celebrates its 21st year in 2022. But Eden is more than just a huge, botanical garden, its a unique resource for education and knowledge towards a sustainable future giving a fascinating insight into the story of mankind’s dependence on plant life. 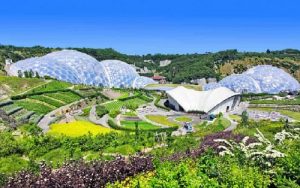